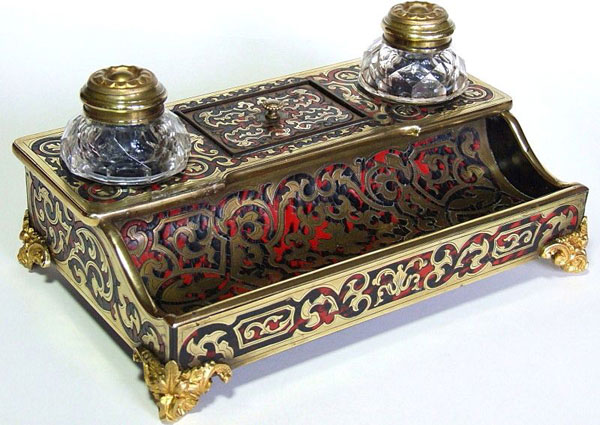 Recently, I am fascinated with inkwells or inkstands. In our present day lives of emails and texts, I think we have forgotten the art of letter writing. Nothing conveys gracious living more than a hand written note. Inkwells were first developed for Egyptian scribes, a profession which was considered princely. During the Industrial Revolution, Victorians were compulsive letter writers. Queen Victoria wrote long letters daily to her daughter Victoria instructing her in protocol. When Victoria ascended the throne, she placed her desk adjacent to her beloved Albert’s, and burdened both with gold framed portraits and inkstands. Her subjects enjoyed emulating her. Soon, library and boudoir writing tables were laden with desk accroutements.  As the devotion to intellectual pursuits grew, the inkwells became more elaborate. The inkstand, or Standish as it was commonly called by the English, assumed decorative importance. Impressive gold and silver stands became suitable gifts for royalty, who had previously scorned letter writing as undignified.

Pewter, lead and other base metals, were used to make inkstands for the ordinary user, while silver was the preferred metal of the wealthy. Other materials used to make the inkstands were porcelain, ivory, and art glass.

As inkstands became more popular, they also became more elaborate and were regarded as objects d’art. The regard for inkwells as objects d’art further increased when they were considered integral to a desk set. It was not uncommon for Tiffany desk sets (pictured below) to have up to 15 desk accessories. Each Tiffany desk set was given a pattern name after the style and sensibility of a certain period.

Throughout American history inkwells have played an important role during significant events by our Founding Fathers and Presidents. Thomas Jefferson dipped a feathered quill into the silver inkwell when signing the Declaration of Independence. The same inkstand ( pictured below) was used for the signing of the United States Constitution in 1787. The silver inkstand was designed by silversmith Philip Sung and has become an important historical artifact to our nation. The inkstand, like many stands of that day, incorporated a bell (symbolic of the Liberty Bell), which was used to summon servants.

Nowhere is the passage of time more evident than in the history of inkwells. The demise of the inkwell began in the 1880s, with the invention of the first practical fountain pen by Lewis Waterman. Although I am extremely reliant on email and texting, part of me longs for a time when one had the luxury of sitting down and writing a heart felt note. Not that one cannot do that today, but there is a certain beauty to the ritual of dipping your quill to and from the inkwell while composing a masterfully crafted note.

« Color Trends 2014: Pretty and Playful Pink Makes Romantic Resurgence at High Point Market
How Is Upholstery Made? A Primer on Good, Better and Best »