Two hundred years ago, the triumph of this scarred and war-torn flag against all odds helped define our national character and identity.

Ralph Lauren, potentially the most preeminent fashion and furnishings designer of our time. Just weeks ago, Ralph Lauren received the James Smithson Bicentennial Medal. He received the medal for restoring the tattered flag. The flag can now be displayed at the National Museum of American History as a national treasure for all citizens to behold.

Sixteen years ago, Lauren donated $13 million to preserve the deteriorated Star-Spangled Banner. Now the grand 30 x 42-foot flag will continue to inspire thousands. The flag is displayed in its glory at the Smithsonian’s National Museum of American History.

But how did this grand flag make its journey from unlikely triumph at the Battle of Baltimore in 1814? How did it become the inspiration for our National Anthem and the national treasure it is today?

The story of the Star-Spangled Banner is one filled with heroes who had vision, talent, and courage. In addition, determination that helped define America.

A Vision of a Star-Spangled Banner

This heroic story brings together visionary Lieutenant Colonel George Armistead. Armistead was the commander of Baltimore’s Fort McHenry during the War of 1812.

In addition, the story includes, a 29-year-old widow and professional flagmaker, Mary Young Pickersgill. Further, a 35-year-old lawyer and amateur poet, Francis Scott Key. The organist of the Chapel Royal London, John Stafford Smith. Above all, many others, including fashion icon Lauren, helped preserve the flag through history.

Picture, the Star-Spangled Banner. Flying above Fort McHenry over the Chesapeake Bay. In the “dawn’s early light” on September 14, 1814.

This image inspired Francis Scott Key. Therefore, he penned the words of our national anthem. But how did the grand flag come to fly over the fort in the first place?

The flag was there due to the vision of George Armistead, the commander of the fort.

Armistead expected that his fort was a likely British target. Armistead told the commander of Baltimore defenses in July of 1813 that he needed a flag. He needed a big flag.

“We, sir, are ready at Fort McHenry to defend Baltimore against (the enemy’s invasion).”

“Except that we have no suitable ensign to display over the Star Fort”.

“It is my desire to have a flag so large the British will have no difficulty seeing it from a distance.”

Let’s give perspective to the massive size of the flag. For instance here’s a view of how a replicate flag flying over Fort McHenry looks today. Fort McHenry is one of the best-preserved star-shaped forts in the world.

And here’s a look from a ground-level vantage point.

The Women Who Stitched by Hand

Later in that summer of 1813, Armistead commissioned a 29-year-old widow and professional flagmaker, Mary Young Pickersgill of Baltimore, to create a 30-by-42 foot flag with 15 stars and 15 stripes, with each star representing a state.

Over the next six weeks, Mary, assisted by her daughter, three of her nieces, an African American apprentice, local seamstresses and possibly her mother, Rebecca Young, worked 10-hour days sewing the flag which contained over 400 yards of English wool bunting and an estimated one million hand stitches.

For weeks, they cut and sewed the stars and stripes by hand, with each stripe measuring two feet wide and each of the stars measuring 24 inches across from tip to tip. When the time came to assemble the flag, it was so large the women could not spread it across the floor of the house, so they carried the stars and stripes and fabric to the Claggett’s brewery across the street, where they spread it on the floor and pieced it together.

When Mary and her team presented the  50-pound garrison flag to the soldiers at Fort McHenry, it took 11 men to raise the larger flag up a 90-foot flagpole, where it could be seen several miles away.

That is where the majestic flag flew over a year later. This is when Francis Scott Key, a 35-year-old American lawyer, boarded the flagship of the British fleet. Key boarded in the Chesapeake Bay on a mission to persuade the British to release a friend who had recently been taken, prisoner.

While Key was successful in persuading the English authorities to release his friend, the British did not let Key and his companions go because they had gained knowledge of the impending attack on Baltimore. The Americans were allowed to return to their own vessel, but were under British guard.

It was under British guard that Key watched from the sea on September 13, 1814 as the barrage of Fort McHenry began eight miles away.

“It seemed as though mother earth had opened and was vomiting shot and shell in a sheet of fire and brimstone,” Key wrote later. 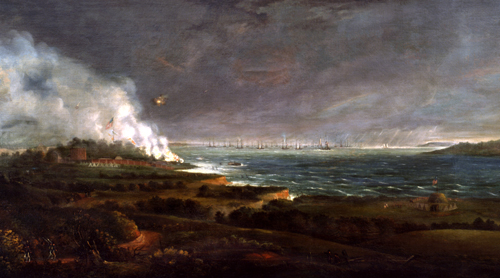 When darkness arrived, he and his American companions could only see red erupting in the night sky, but they stayed awake all night as rockets fired and bright flashes exploded in the sky. With the relentless scale of the 25-hour attack, Key thought there was no hope.

Therefore, as dawn began to break the next morning, Key looked anxiously to the horizon. If the flag was lowered, it would mean that the Americans had been defeated. After that, as the smoke cleared, he turned his eyes to the direction of Fort McHenry. The American flag. He saw the flag flying proudly over the fort. Not the British Union Jack. Above all, this announced an American victory!

As his heart soared, Key wrote his thoughts on paper while still on board the ship, setting his words to the tune of a popular English song composed by John Stafford Smith, the organist of the Chapel Royal London.

A National Anthem is Born

Here is the original manuscript, in Key’s handwriting, initially titled “The Defence of Fort M’Henry”: 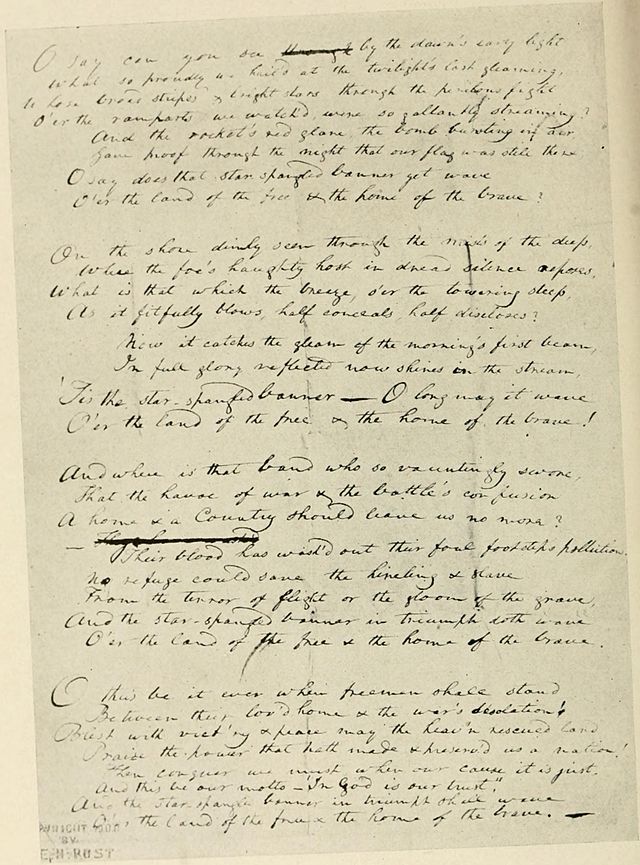 The Baltimore Patriot newspaper soon printed the poem and within weeks, the poem, now called “The Star Spangled Banner” appeared in print across the country, immortalizing Key’s words and forever naming the flag that it celebrated.

“Oh, say can you see, by the dawn’s early light

What so proudly we hailed at the twilight’s last gleaming?

Whose broad stripes and bright stars through the perilous fight,

O’er the ramparts we watched were so gallantly streaming?

And the rocket’s red glare, the bombs bursting in air,

Gave proof through the night that our flag was still there.

Oh, say does that star-spangled banner yet wave

O’er the land of the free and the home of the brave?”

After the Battle of Baltimore, Fort McHenry remained under the command of Armistead, and the Armistead family eventually came into possession of the flag.

Armistead’s wife, Louisa inherited it upon his death. It’s believed she stitched the upside-down “V” (planned to be an “A” for the family surname) in red on the flag.

After Louisa’s death, the couples’ daughter Georgiana Armistead Appleton inherited the flag and loaned it to George Preble, a flag historian, in 1873. Preble commissioned the first known photograph at the Boston Navy Yard. The flag remained here until 1876.

The Star-Spangled Banner at the Smithsonian

Appleton wanted the flag to ‘belong to the country where it can be conveniently seen by the public and where it will be well cared for.”

The flag arrived damaged, due to wear and tear and pieces removed as souvenirs. Therefore the flag was smaller (30 by 34 feet).

During the rest of the 20th Century and until now, the flag has been on display and has undergone preservation in various stages, including the most recent and ambitious preservation efforts funded by Polo Ralph Lauren, The Pew Charitable Trusts and the U.S. Congress.

The Secretary of the Smithsonian Institution is H. Michael Heyman. Visitors ask:

“Which of the institute’s more than 140 million objects is our greatest treasure, our most valued possession?”

Of all the questions asked of me, this is the easiest to answer. Our greatest treasure is, of course, the Star-Spangled Banner.”

The Star-Spangled Banner and its Legacy

When I think of all the people behind the Star-Spangled Banner–from the women who stitched stars and stripes by hand, to the soldiers who defended the flag, to the poet who immortalized it, to the family who handed it over to the Smithsonian, to all the individuals who worked for or funded its preservation, I have a new appreciation of the varied personalities and talents who played a part in the nation-defining events surrounding this epic flag.

The contribution of so many on so many levels to our country’s character and history is what makes America glorious, and the object of our pride and celebration this July 4, 2014. 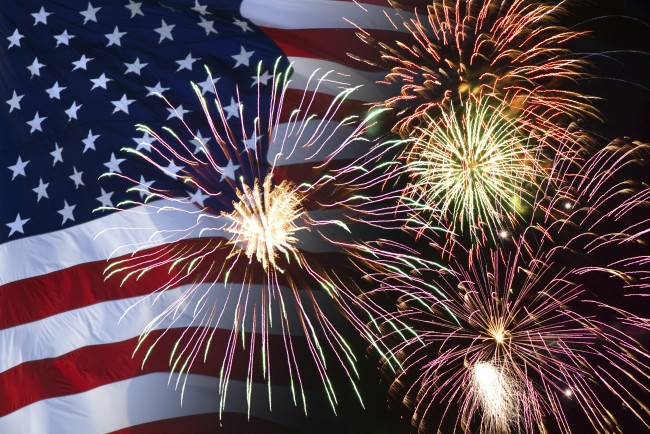