Leslie and her beautiful daughter, Amy, above, {entering the University of Texas at Austin this fall as a freshman } and her family and friends, left Midland, TX on Wednesday and have been attending one of Texas’s longest standing traditional events: Waco’s Cotton Palace and Pageant. Friday night, April 25th, was the main event where young ladies and gentlemen and their families from all over Texas met each other and joined together to celebrate the long history of cotton’s importance to Waco’s history and development.

Here’s a map of Texas to help you see where Waco is compared to where Leslie lives in Midland.

Join with me as I take you on a journey through the history of Waco’s Cotton Palace – with a brief detour to visit Governer James Hogg’s daughter’s contribution to the nation’s furniture and decorative arts traditions: Houston’s famous home and gardens: Bayou Bend – now part of the The Museum of Fine Arts, Houston. Governor Hogg, as you’ll soon read, was involved in the opening day of Cotton Palace in 1894.

In 1890, Waco, Texas was larger than Dallas, Fort Worth and El Paso due in part to the Waco Suspension Bridge, the largest single span bridge in the United States. Also contributing to Waco ‘s large population was the Waco Tap Railroad which tapped into the Houston and Texas Central Railroad from Houston to Dallas.

Cotton became the most important factor in determining Waco ‘s future. The invention of the steel breaking plow allowed planting in the rich Blackland prairie. Farmers from a hundred miles away brought their “white gold” to Waco to be ginned. Consequently, cotton buyers by the dozens opened offices in Waco and shipped Waco ‘s cotton by rail to Galveston and New Orleans, to be shipped to Europe, South America and India.

Waco aspired to have a Fall Festival which would promote the city. In 1894 Waco residents raised the money to build an exposition hall with seating for 5,000. 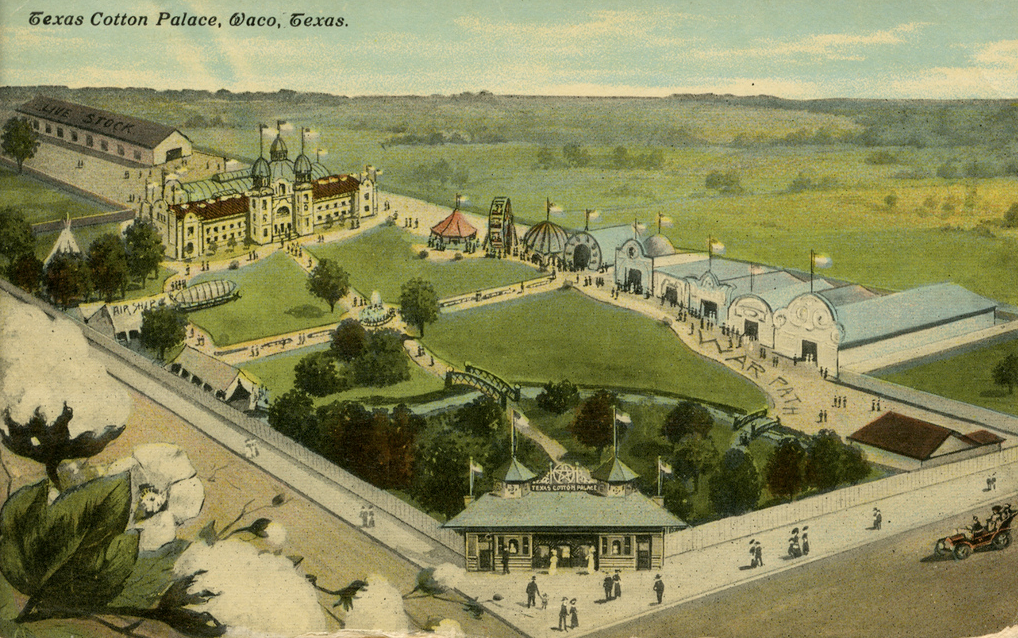 On November 8, 1894, Governor James Hogg  was was guest of honor on opening day of the month-long Cotton Palace. The event included a parade, agricultural exhibit, amusement area, orators, and musicians. The first Cotton Palace Exhibition was a grand success – bringing visitors from all over the state.

Interestingly, Governer Hogg’s brothers also developed Houston’s River Oaks neighborhood and he was the father of Houston’s most well known philanthropist, Ima Hogg. Upon her death, she donated her home, Bayou Bend and 14 acres of organically maintained gardens, to the Houston Museum of Fine Arts – where it is now the MFAH’s House Museum for American Decorative Arts and Paintings, containing one of the country’s most esteemed collections of furniture and decorative arts from the mid-seventeenth through nineteenth centuries.

The Gardens at Bayou Bend 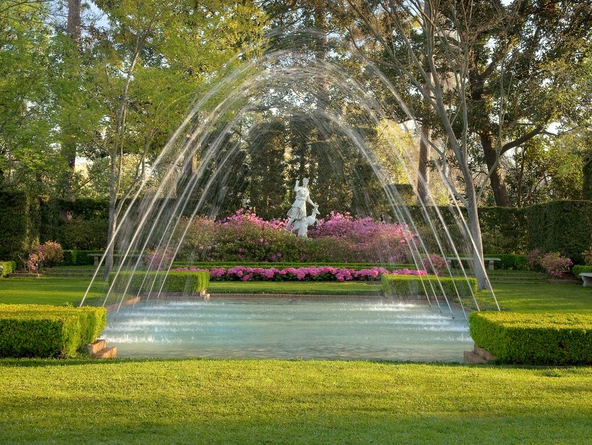 Sadly, six weeks after the grand and successful opening of the Cotton Palace,  the building burned to the ground.

Texans Never Give Up!

In 1910, the Texas Cotton Palace was re-established and the building re-built. It became more elaborate each year until 1930, when the the crowd was small and the Depression had taken its toll on the Exhibition.

In 1970, the Texas Cotton Palace was revived by residents of Waco. Today, 44 years later, The Waco Cotton Palace is an exciting stage production held at Waco Hall on the Baylor University campus that recounts the history of Waco. The colorful two-hour stage show features local residents who use drama, song and dance to chronicle the history of Cotton Palace.  Families with daughters – from all across Texas attend – and a local Wacoan young lady is crowned *Cotton Palace Queen.*

This year, that honor belongs to Waco’s Alexandra Lee Jester Deaver, pictured below.

Have you ever been to, or heard of Waco’s Cotton Palace before this post, Hadley Court readers? If so, we’d love to hear your memories in the comments and, if not, we hope you’ve enjoyed this brief tour into an important family touchstone and tradition for many Texas families.

Congratulations to your queen, Waco, and to all the young men and women who participated in the Cotton Palace in Waco tonight – may all your future dreams come true – from your friends at Hadley Court.