’Tis the season for all things jolly—including gingerbread house displays!

I’ve always loved making gingerbread houses. It’s a fun family tradition I enjoyed as a child, and one I now get to enjoy with my own children!

But these gingerbread house displays are much more than what you get in a DIY-kit. They’re positively wow-worthy, and worth a visit.

Read on to see some of the most impressive hotel lobby gingerbread house displays you’ll see around the country.

The Fairmont is well-known for getting into the holiday spirit, and this season Fairmont San Francisco has seriously delivered with this dazzling gingerbread house display.

This two-story life-sized gingerbread house is completely edible and a whopping 25 feet high!

You’ll be tempted to take a bite out of one of the 6,000 gingerbread bricks or dig into some icing—3,300 pounds of it to be exact.

For 27 years, pastry chef David Diffendorfer has created a stunning gingerbread house display for The Benson Hotel in Portland.

This year, the gingerbread house is modeled after a famous Portland landmark and is made from 100-150 pounds of gingerbread!

You may also like: Farmhouse Christmas Decor Ideas You’ll Love

If your travels take you to Europe this holiday season, be sure to stop in and feel the holiday magic at The Peninsula Paris.

In addition to a life-size gingerbread house display, the hotel also has an ice rink, baking classes for kids with the master pastry chef and horse and carriage rides.

Don’t miss the holiday yurt where adults can enjoy mulled wines, hot chocolate or a glass of bubbles.

Disney is synonymous with magic, so it’s no surprise they’re delivering plenty of holiday happiness with a gingerbread house display at the Grand Floridian Resort.

This completely edible creation is a stunning two-story victorian masterpiece featuring poinsettias along the porch and fun friends like nutcrackers, snowmen and even Santa.

More than 1,000 pounds of honey was used to create this gingerbread house display, along with 600 pounds of powdered sugar; 700 pounds of chocolate; 800 pounds of flower and of course, plenty of Pixie Dust.

Be sure to look for the hidden Mickeys!

The Gingerbread house at La Fonda on the Plaza in Santa Fe, New Mexico, is cut out to resemble the adobe exterior of the hotel itself. It’s a tradition that’s been going on for the past eight years!

Assembly takes hours and involves everything from icing the house to adding LED lights and, of course, even more icing!

The two-and-a-half-foot masterpiece is on display in the hotel’s lobby through New Year’s.

Enjoy not just one, but more than 30 gingerbread house displays at the Hyatt Regency Vancouver Gingerbread Lane.

This festive fundraiser benefits Make-A-Wish BC & Yukon and has raised more than $75,000 for the organization to date.

You’ll see traditional gingerbread houses and even modern displays, like a cartoon-themed display with favorites like Winnie the Pooh and Buzz Lightyear. 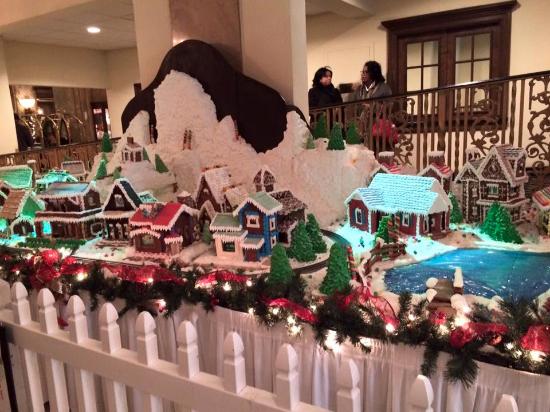 The pastry staff has been working on their creative gingerbread house display seen at The Peabody Memphis since September!

And instead of just one house, this year you’ll see an entire Christmas Village in the hotel’s lobby.

Everyone’s favorite chipmunks, Chip and Dale, got their very own gingerbread house at the Grand Californian Hotel. The house is completely edible and took two weeks to create. 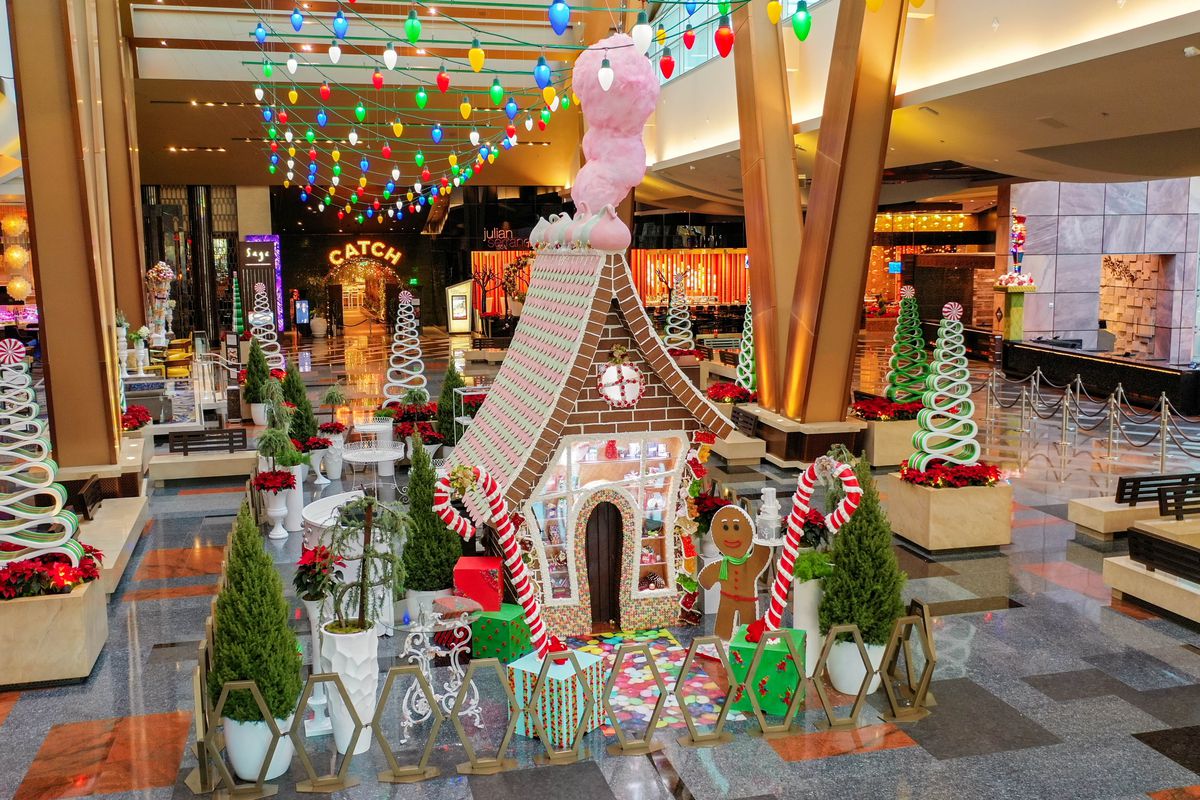 If your travels take you to Sin City during the holidays, you’ll want to stop by the Aria, Las Vegas and check out the gingerbread house display in the hotel lobby.

It took more than 400 pounds of gingerbread and three weeks to construct the edible house, which is a whopping 15 feet tall and 12 feet deep.

The 5-foot-tall gingerbread man that stands at the entrance to the house weighs 120 pounds!

The Story Behind Gingerbread Houses

Did you know: Gingerbread house displays originated as far back as Germany during the 16th century!

They became even more popular after the fairy tale of Hansel and Gretel was released. Though it’s not entirely certain what came first: the gingerbread houses or the fairy tale!

It may not be easy to travel during the holiday season, but fun gingerbread house displays like this and festive holiday activities make things that much sweeter. Pun intended.

What do you think of these magical gingerbread house displays? Will you be seeing any at a hotel near you?

« The Art of Eclectic Style Interiors
Entryway: Tips for a Lasting First Impression »