Letters from loved ones are always welcome.

But when loving messages come from romantic, breathtaking locales like the coastal panorama of Cinque Terre, Italy, or from the fairytale city of Venice, below, they take on a whole new sense of excitement.

Over the last two weeks, I’ve checked the computer each day with anticipation, waiting to see what photos and commentary our daughter, Ashley, had delivered into my in-box or posted on Facebook.  A rising senior at the University of North Carolina-Chapel Hill, Ashley is studying abroad at the Lorenzo de’ Medici School in Florence, Italy during the month of July.

As a student who very much appreciates art, history and design, she has been thrilled to be surrounded by some of the greatest sculpture and architecture of the Renaissance in a city that defines classic design, Florence.

Compliments of Ashley (who is studying photography at Lorenzo de’ Medici School), sit back and enjoy this tour of the sights of Florence, along with a step back to Medieval Tuscany in Siena, and scenes from the beautiful coastal region of Cinque Terre (pronounced Chink-way Terr-a), which means Five Lands. This is a charming area comprised of five little towns on cliffs over the Ligurian Sea.

Cinque Terre and the Beach of Monterosso

During Ashley’s first weekend in Italy, she and her apartment mates ventured off on a train ride through the rugged but beautiful countryside to the Western coast comprised of the five towns of Monterosso, al Mare, Vernazza, Corniglia, Manarola and Riomaggiore. The towns are connected by mountainous hiking trails and steep cliffs.

The trail from Monterosso to Vernazza took an hour and a half for the girls to climb, and the trails were so narrow and cliff-like in some spots, that if another person passed in the opposite direction, they had to lean in towards the mountain to let the other person pass.

It makes me appreciate these views that were afforded by her precarious climb!

The coast is rocky and steep in most areas, but Monterosso has a beach that is more traditional and suitable for sunbathing and swimming.

They ate lunch at a restaurant overlooking the ocean, and saw vibrant color and beauty all around them in the town and marketplace.

Ashley and her fellow students also ventured to Siena, which she describes as a magical town full of history from the Middle Ages. The town is divided into 17 districts that each have great pride in their identity. They express this pride through pageantry with district parades featuring drummers, flag bearers and flag twirlers.

Each of the districts has its own symbolic and colorful flag.

Adding to the magic of the town was a charming wishing well tucked away in a private square with a music hall next door playing beautiful classical music.

The girls enjoyed making a wish and dropping a coin into the well. Looking down into the well, Ashley said there were more types of currency from all over the world than could be imagined.

While Siena has an overall feeling of intimacy, it also has its share of the grand with the Duomo (Cathedral) of Siena.

From the sacred and exquisite interior and exterior of St. Lorenzo Basilica to the carousels and street artists, Florence is a city of inspiration and charm.

Not the least of Italy’s charms is the specialized cuisine of the area, including gelato, which Ashley describes as like ice cream but ten times better. Her favorite flavor is white chocolate and cinnamon.

And the pizza…delectable. This is a personal sized margarita pizza of basil, ham and tomatoes.

Still adjusting to a six-hour time difference, the students have all become coffee addicts and have discovered that Italian “bars” are combination coffee shops and pubs. They often offer pastries and gelato as well. The first time she ordered coffee, Ashley was surprised at how small the cups and serving sizes are. But now, she’s come to prefer the smaller servings that are “just right,” and believes that Italian cappuccino is far superior to American. 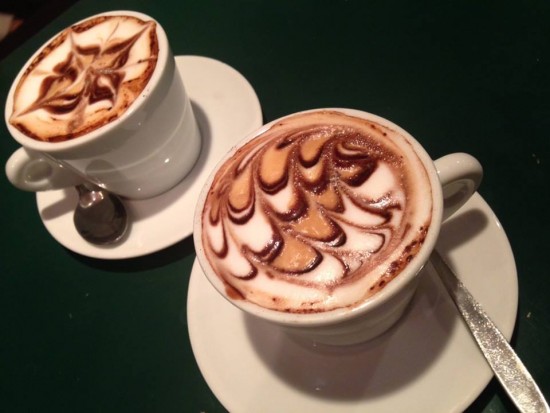 From experiences such as seeing art from masters like 14th Century painter Sandro Botticelli to taking a Gondola ride in Venice, Ashley is finding that her mind, spirit and world view is expanding.

She recently posted an instagram with the hashtag #La vita d’ buona: “life is good.”

And she added a word of wisdom: “When in Italy, don’t forget to look up.”

What a perfect picture of the larger view of the world and life that is the true gift of her study abroad experience.

All photos by Ashley Caroline Shaver.